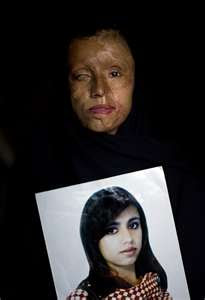 
All these women have one thing in common – they’re all victims of acid attack inflicted by their boyfriend, husband or family…someone they knew.
I’ve always been quite an emotional person and I can’t for the life of me comprehend how one could concoct in his (or her) sick mind to throw acid on someone who is supposed to be family or loved one. I can understand extreme anger where one may at some point lose control, but it still does not justify the use of violence...and definitely not throwing acid on someone. The scars can permanently disfigure the victim. Though the act does not kill, it does to a certain extent or at some point break the victim’s spirit and will to live, unless the victim gets strong support from people...people who can make them feel that they have to fight for justice and that life despite their tragedy, is still worth living.


When Fakra Yunus jumped from the 6th floor of her flat in Italy last March 17, 2012, it revived the public uproar on the lack of action by the Pakistani government to prevent acid attacks and other forms of violence against women. Fakra endured more than 3 dozen  operations after her husband’s acid attack in 2000…and it was done while her 5-year old son was watching. The attack practically destroyed her face beyond recognition. But it was also her husband’s ex-stepmother who helped her escape to Italy and endure the last 12 years of multiple surgeries to restore the damage done to her. In the end, everything became just too much for her to endure and she took her own life.
This was not the case though for Naila Farhat, also from Pakistan. She was just 13 years old when a man threw acid in her face in 2003 because her parents refused to let him marry her. But she is fighting back and encouraging other victims to do the same. Her words serve as inspiration to many like her:  "I encourage other acid attack victims and tell them that they should continue fighting for their rights and should not hesitate to come out of their homes, they should come forward." Her fight is now with the Supreme Court of Pakistan.


Victims in Pakistan like Naila Farhat have a big battle to fight. With a culture where violence against women seems acceptable to society, the fight for women’s rights can be quite difficult and even excruciating. And with even the police turning a blind eye due to corruption and social pressure, many victims suffer in silence, in fear…in shame, physically and mentally ruining their lives.
Acid attacks however, do not just exist in Pakistan. They are also quite common in Afghanistan, Cambodia, Bangladesh and India. Incidents have also been reported in London, Brussels (where an attacker was recently convicted for 30 years in prison) and the United States.


The Bangladesh Acid Survivors Foundation reported that an average of 228 acid attacks have occurred each year since 1999.  The Acid Survivors Foundation in Islamabad reported that around 150 women are “viciously attacked each year by men who easily obtain acid used in the cotton industry.” The Human Rights Watch reported that in 2002, 750 women were injured in acid attacks in Pakistan. The incidents have gone down since then with many women’s groups and international organizations creating awareness of the problem and helping victims pursue the case against their attackers.
Though the statistics vary from different sources, one thing remains clear. The problem exists and something has to be done about it.


With acid being an easy weapon to buy and use anywhere, there is a strong need to control or regulate its sale as well as impose stronger penalties for those who carry out the attacks. Monetary consideration should never be a means to legally exonerate an attacker. Medical, Legal, and social reintegration programs are critical and should be made available to victims. Only then can they have a chance to rebuild their lives again and become emotionally and mentally secure again, financially and socially independent again.
*Acid attack victims:


Katie Piper (London)  -  former TV presenter, disfigured by an acid attack by a violent boyfriend
Naila Farhat (Pakistan) -  doused with acid in her face in 2003by a man because her parents refused to let him marry her.
Manzoor (Pakistan) - drenched in acid after being beaten to unconsciousness after a fight over doing the dishes
Iram Saeed (Pakistan) – victim of acid attack for rejecting a marriage proposal
Naseera Bibi (Pakistan) – attacked with acid while she was sleeping. She suspects her husband as the attacker
Derri Valarde (Arizona) - approached by an acid-wielding stranger outside her home