No Place for Girls

India was, and in some ways, is still a hub of anti-girl activity. Be it foeticide or rape, infanticide or dowry harassment, India truly deserves the spot it has on Thomson Reuter’s list, as being the fourth worst place in the world to be a woman. 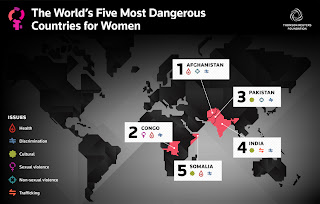 And slowly buttressing Reuter’s claim is a new phenomenon that’s coming to light – perhaps has already been happening covertly – I have no substantive understanding of the situation before I came to know of two cases. First it was Baby Falak in Delhi, and then it was Baby Afreen in Bangalore.

In March, two-year-old Falak was trafficked and cruelly tortured, and finally brought to a hospital by a mentally unstable teenager. More recently, Baby Afreen in Bangalore died after a rough battle for life, after much torture and abuse.

To have One such case, is unfortunate, perhaps an exception to a norm. To have Two such cases, is depictive of an ominous propensity in a patriarchal society. Gender Discrimination, Bias and Violence against girls and women transcend caste and class barriers, and occur everywhere indiscriminately – be it in rural or urban India. India’s statistical record projects the very same tendency. A child sex ratio between children in the 0-6 year old age group is dismal - 914 females for every 1000 males. In 1991, it was 945 for every 1000. Amniocentesis was construed at one point, the reason for the discrimination against the girl child. Immediately thereafter, the determination of the sex of a child was frowned upon by the law. But instead of becoming effective in action, this law remained an embarrassing paper tiger, observed heavier in its breach than in its genuinely expected modus. Pliable medical professionals, a lack of ethics, bureaucracy and the institution of corruption and bribery make for a heady mix, appearing as a hurdle in the path of efficient implementation of a law.

Although Falaks and Afreens exist at the grass-root level, the maladministration in the highest rung is a very big contributor to the prevalent situation. The policy of a two-child family norm in a society has more implications than the government is willing to perceive and comprehend. In a society where the birth of sons is lauded and the birth of a daughter is oftentimes met with disappointment. The preference for sons is predominant, and the preference for a daughter is few and far between. There are state-level laws that disqualify elected representatives of local bodies if they have more than two children. While it is a demographically inspired move, the very basis, the common sense and logic that should underlie policy is ignored. Fertility decisions are no longer about numbers, but rather about the survival of the children who are born, themselves. Deciding the size of a family as an eligibility criterion is the determination of a candidate’s entry into public office.

The judiciary, too, sadly, has upheld these kinds of laws, worrying only about demographics and not on the manner in which families would function, thus having something like a chain reaction on each thread constituting the entire fabric of society. It is sad that the government fails to understand the significance of creating equal opportunities at every level and dispelling the notion that only a son is the ideal child, and not a daughter. Traditional stereotypes that hold no place in a situation where the concerned customs themselves have been replaced must be dispensed with. Until then, a woman in India is hardly empowered.

By Kirthi Gita Jayakumar
Posted by Unknown at 08:00

Email ThisBlogThis!Share to TwitterShare to FacebookShare to Pinterest
Labels: Kirthi Gita Jayakumar, violence against women and girls, Women and girls in society