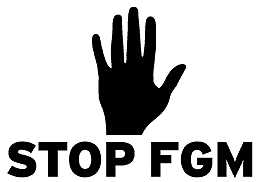 According to the WHO (World Health Organization), FGM/C (female genital mutilation/cutting) includes all procedures and practices that intentionally alter or injure female genital organs for non-medical reasons. It is mostly carried out on young girls between infancy and the age of 15 – normally by untrained midwifes without anesthetic, using unsterile cutting devices. Approximately 140 million girls and women worldwide live with the consequences of FGM/C and an estimated number of three million girls in Africa are at risk of undergoing the procedure each year. Every form of FGM/C harms women and girls physically as well as mentally. Consequences can include excessive bleeding that in some cases even leads to death, problems urinating, childbirth complications and stillbirths, serious infections, pain and fear during intercourse, feelings of oppression and depression, among many others. How can this severe human rights violation be stopped?

Recently, I have noticed that there seems to be a trend to end the harmful traditional practice FGM/C by obtaining fatwas from religious leaders of Islam. Putting an end to a custom that is part of an ancient culture, but often justified by the religion, raises the question whether fatwas are an effective tool for changing the underlying attitudes that have developed over the past 5,000 years. Can religious fatwas really stop FGM/C and change a cultural tradition at its roots?

To begin with, a fatwa is a groundbreaking legal edict in the faith of Islam that can be pronounced and issued by an Islamic scholar (e.g. Imam, Mufti, Sheik) after being discussed with other scholars. Whether a fatwa is legally binding or not depends on the religious tradition such as Sunni or Shi'a Muslims. In order to answer the question of whether fatwas can stop FGM/C, it is important to keep in mind that FGM/C is an ancient custom that has already been practiced long before the arrival of Christianity as well as Islam. However, now the custom is mainly carried out in African countries around the Sahel zone and emigrants from these countries have also brought their traditions to Europe, the U.S. and other countries. Even though the FGM/C is also practiced by Christians, the majority is Muslim and in many cases they erroneously use the religion of Islam as a justification for this cultural tradition.
FGM/C is practiced by specific ethnic groups and tribes rather than by citizens of a whole country. Not only in remote rural areas, but also in bigger urban centers, girls undergo this procedure and the tradition is prevalent. The traditional practice often constitutes a taboo and therefore is shrouded in silence that needs to be broken. Moreover, due to the lack of education and discourse, even the decision-makers and opinion leaders of specific groups are often unaware of the negative consequences and the harm the excision of female genitals causes for women and thus for the whole community. FGM/C is an accepted and required social behavior which is justified by a fatal system of beliefs that include: uncircumcised women are unclean, will not find a husband and have a bad life; women’s genitalia grow uncontrollably if they’re not cut off; it is a religious requirement; it is a necessary rite of passage to womanhood and it plays an essential part in raising a girl properly; only to mention a few.

As FGM/C is practiced by many Muslims who expect it to be a religious requirement in Islam, there has been a growing number of influential and high-ranking Muslim scholars  that have taken a public stance on the issue. Remarkably, there was an international  conference in which Islamic scholars, scientists, specialist researchers, medical doctors and activists of NGOs from around the world participated in order to take responsibility and discuss the inviolability of the female body as well as a ban of female excision in Islam. The conference took place on 22/23 November 2006 under the patronage of Prof Ali Gomaa, Grand Mufti of Egypt, and was hosted at the university of al-Azhar in Cairo, the intellectual center of Sunni Islam. After hearing speakers from across the different fields, the participants of the conference unanimously concluded that “the mutilation practiced in some parts of Egypt, Africa and elsewhere today represents a deplorable custom which finds no justification in the authoritative sources of Islam, the Qur’an and the practice of the Prophet Muhammad.” This historic conclusion was also written down in a fatwa.

The participants of the conference emphasized that the Prophet Muhammad never subjected any of his own daughters to excision and that the prohibition of inflicting harm on any human being is a key principle in Islam. Thus, the practice of FGM/C is a crime that violates the highest values of Islam and is consequently forbidden today. Furthermore, men and women are equal in terms of the human spirit they share. In the eyes of God, men and women are to be treated the same way regarding social responsibilities, education, finances, property and all other religious obligations. However, due to the harm female excision causes, it cannot be compared to male circumcision and therefore needs to be stopped. Islam honors women deeply and guarantees their physical and mental protection. Besides, both genders are equal as they complement each other – regardless of all natural differences, men and women are the honored creation of God.

With the conference at al-Azhar, Islam has proven to be a religion of learning that is able to adapt to changes in the world and develop further according to the current knowledge in science. The participants of the conference call upon Muslims around the world to put an end to this ancient custom and speak up wherever it is practiced. Additionally, they further request regional and international organizations as well as institutions, governments and the media to work towards the elimination of FGM/C, and to educate people about medical principles as well the negative effects the practice has on the health of women and society in general.

The practice of FGM/C shows the complex interplay between cultural traditions and religion. As religious leaders often have the last word, fatwas are a useful tool for supporting awareness campaigns of organizations and individuals towards putting an end to the custom. Yet, fatwas alone are unlikely to stop FGM/C as they only work against the symptoms, but not the roots of the cultural tradition that is derived from the myth of female chastity and purity. Fatwas are good to start with, but it will take more to change a culture at its roots that predates the rise of Islam as a religion.

Finally, more work needs to be done towards breaking patriarchal structures and common internalized misconceptions. Therefore, it is crucial to put all our efforts into the empowerment and education of especially women and children. This will change the consciousness of groups that still practice the tradition FGM/C today, and it will automatically stop them from doing so in the future. In the end, the last decision of rejecting the traditional practice, and thus changing prevalent social beliefs, has to come from the people itself and cannot be forced from the outside through rules or laws.
By Nicole Staiger