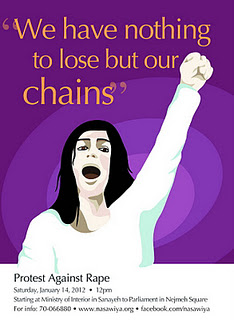 Rape is a crime of a sexual nature that is committed by one or more people to force someone to have sex in the form of penetration of the vagina or anus with a penis or other body force in the form of violence or threat of violence. The following outlines the types of rape:
1.       Rape by Boyfriend
This type of forcible rape is by someone known to us without the consent of the woman herself. There are many instances of rape by boyfriend experienced by women in the world. – but merely because of the fact that it is committed by a boyfriend, it is often not construed as rape even if forcible.
2.       Rape of Women
A rape victim is usually a woman. In the United States about 1 in 6 women experience rape. Female rape victims are usually more embarrassed to report as a moral burden and embarrassment they face when reporting rape.
3.       Rape with Drugs
This is where the rapists give medicine or drugs to make his victims drunk, passed out or asleep, making it easier to commit rape.
4.       Mass Rape
This is rape by a group of people who attacks someone. About 10% or 20% of cases of rape are carried out as mass rapes. In some countries the mass rapes are more serious than rape committed by individuals, and is thus condemned.
5.       Rape of Boys
Not only women, but men also experience rape. About 1 out of 33 men experienced rape in the world. Although the rape of men considered it strange or impossible as it is usually men who commit rape.
6.       Rape of Children
Rape is a form of sexual abuse of a child, whether performed by a father, uncle, aunt, mother, grandfather or other relatives. This usually affects the psychological bent of a child, and causes trauma.
7.       Rape by a husband / wife
Rape can also occur in a married couple. In many countries it is considered unlikely because two people are married to have sex anytime. In fact, many husbands who force their wives to have sex are committing an act of marital rape.

Source : http://id.wikipedia.org/wiki/Pemerkosaan
Posted by Unknown at 08:00