Women in Afghanistan: What will happen? 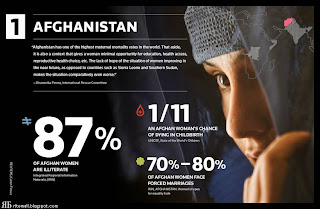 In July 2011, Afghanistan was rated as the world’s worst place to be a woman, qualifying as the most dangerous country for women. There isn’t much of a surprise in this, too, seeing cases like those of Gulnaz, Sahar Gul, Aisha Bibi, Malala Yousufzai and so many more women. As is the case in every country, the war was its harshest on the women in the country. While there have been efforts in trying to piece the lives of these women back into a state of normalcy, or at least, near normalcy, the process has been terribly slow at best. A decade and two years since, the question of progress of the lives of these women still continues to be a cause for concern.

The Taliban regime in Afghanistan was the proverbial death-knell for progressive lifestyles of women in the country. With the advent of the Taliban, Women were denied some of their most basic human rights and fundamental freedoms. The right to life, to work and study, to access health care, the freedoms of expression, movement and religion were no longer allowed to be enjoyed by women. There were instances of women asserting their rights under the Taliban regime, only to be subjected to public lapidation, beatings and imprisonment. Women were oppressed and left bereft of the rights that were inherent to their very existence. Women were not allowed to leave their households unless they had a burqa and had a male-member of their family to accompany them. These policies rendered many women immobile   and confined to their houses, because they were either too poor to afford a burqa, or, had no male relatives left after war. The women who remained at home were made to paint their windows so that no one could look in, from outside, and vice-versa.[1]The few women who once held respectable positions prior to the five years under Taliban rule, were forced to beg to survive, or to stay confined in their houses.

The consequences were manifold. Women teachers who functioned prior to the Taliban regime were no longer allowed to teach at schools. This led to the redundancy of many schools, and the imposition of a severe strain on the education system. Women in the medical field, though were allowed to continue, because women could only be treated by female physicians only. Despite that, there was a steady decline in access to medical care and health care facilities, because it was frowned upon for a woman to go to a hospital. The few that tried were beaten brutally. After braving all of that, if a woman made it to the hospital, there was no guarantee that she would be seen by a doctor.[2] On the other hand, a parallel market of human-trafficking, prostitution and slavery thrived as the covert industry flourished under the rubric of harsh mistreatment of women.[3]

Women are still vulnerable to attack and harm, despite international military presence. Security is lacking, and it is only second to this basic survival question, that health and education play roles. In a country that is still picking up pieces in the aftermath of years and years of war, what can we say of the future of women in Afghanistan?