Women have Dreams too!

I’ve been away from London for about 3 weeks to visit my homeland Nigeria. I had so much fun that I actually cried at the Murtala Mohammed Airport in Nigeria (drama queen behaviour haha). Anyways hope everyone is okay! During my stay I had the opportunity to visit a village called Akpugo in the eastern part of Nigeria, where I met some of the loveliest people. However, one of the main things I discovered from interacting with many of the women in Akpugo was the general preference for men to be engaged in higher education and skilled labour.
For the young girls in developing countries, school might be an option for a few years, but most girls are pulled out at the age of 9 or 10 when they're useful enough to work all day at home. Nine million more girls than boys miss out on school every year, according to UNICEF. While their brothers continue to go to school or pursue their hobbies and play, they join the women to do the bulk of the housework. Housework in developing countries consists of continuous, difficult physical labour. A girl is likely to work from before daybreak until the light drains away. She walks barefoot long distances several times a day carrying heavy buckets of water, most likely polluted, just to keep her family alive. She cleans, grinds corn, gathers fuel, tends to the fields, bathes her younger siblings, and prepares meals until she sits down to her own after all the men in the family have eaten. Most families can't afford modern appliances, so her tasks must be done by hand—crushing corn into meal with heavy rocks, scrubbing laundry against rough stones, kneading bread and cooking gruel over a blistering open fire. There is no time left in the day to learn to read and write or to play with friends. She collapses exhausted each night, ready to wake up the next morning to start another long workday. Most of this labour is performed without recognition or reward. UN statistics show that although women produce half the world's food, they own only 1 per cent of its farmland. In most African and Asian countries, women's work isn't even considered real labour. Should a woman take a job, she is expected to keep up all her responsibilities at home in addition to her new ones, with no extra help. Women's labour goes overlooked, even though it is crucial to the survival of each family. 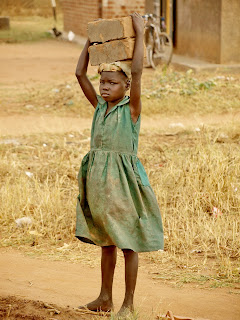 Women and Men are equal and women should never be treated as second class. Women have rights, dreams and aspirations! We cannot continue to overlook the way in which poorer women are being classified and undermined around the world we live in!
Posted by NollyWoodTwoKobos at 08:00