Fact: The number of children under the age of eighteen who have been 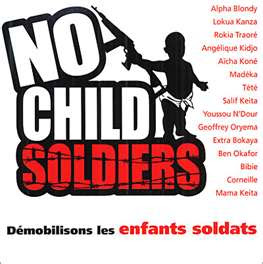 coerced or induced to be child soldiers is at least 300,000.
Fact: Most soldiers under fifteen are in non-governmental military organizations

Fact: Over fifty countries currently recruit children under eighteen into their armed forces.

Fact: Girls make up one third of child soldiers.

Fact: Most soldiers are between the ages of 14 and 18.

Fact: The Convention on the Rights of the Child was adopted by the General Assembly on May 25, 2000 setting the minimum age for compulsory recruitment or direct participation in hostilities at 18.

Of the millions of children displaced by war, unaccompanied children are the most likely to be killed, tortured, raped, robbed and recruited as child soldiers. Statistics showed that in Third World countries, 75% engaged in conflicts were child soldiers, some as young as 7 or 8 years old.

According to a UNICEF study, “Not only are large numbers of children killed and injured, but countless others grow up deprived of their material and emotional needs, including the structures that give meaning to social and cultural life." (http://www.unicef.org/graca/women.htm). This is especially true when these children are displaced in society and taken away from the security of their homes and schools or even their religious foundation that disorient the stability of their emotional and moral beliefs.

From the same study, it was also stated that sexual abuse also appears to be a “systematic policy of war, deployed to terrorize civilian communities.” It further pointed out for instance, that in some raids during the Rwanda hostilities in 1994, “virtually every adolescent girl who survived militia attack was later raped.” The same systematic approach of rape of teenage girls occurred in Bosnia and Herzegovina. In the more than 20 years of conflict in Uganda, the government had been fighting the rebel group called Lord’s Resistance Army (LRA), known to be abducting children during night time raids, and forcing them into combat and sex slavery.

About 20,000 children were abducted during the more than 2 decades of conflict with the LRA. More recent conflicts in Sudan, Afghanistan and Libya further confirms the use of rape as weapons to inflict torture on children, especially females. Though anyone experiencing conflicts of war or hostilities can become a victim of human rights, the situation is so much tougher on females. They not only become combatants but also sex slaves, forced or coerced to have sexual relations with male combatants to “ease the stressful conditions” of war or being away from their families. It is clear that even in armed conflict, gender inequality strongly exists. This does not discount however, that there are documented stories of males who were also victims of rape.

Needless to say, the physical and emotional trauma a child, male or female, has to endure during such conflicts can lead to temporary or permanent separation of children from their families. The social and psychological impact of such separation can be irreversible especially for these children taken away from the security of their families at such an early age.

It is a sad reality that amidst such crisis, there are organized groups that ride on these conflicts to gain profit. The UNICEF reported that in Bosnia and Herzegovina alone, some evacuations of children had been organized by groups intent on profiting from adoption markets. It was also confirmed that “in 6 out of 12 country studies prepared for a research report ... the arrival of peace-keeping troops has been associated with a rapid rise in child prostitution.

In Mozambique, a commission confirmed after investigation, that peace-keeping forces sent by the United Nations Observer Mission in Mozambique (UNOMOZ) after the signing of the peace treaty in 1992, recruited girls aged 12 to 18 years into prostitution.

To help protect each child, the UNICEF report called for tighter measures to provide children, especially the displaced and unaccompanied ones, with a “continuous caregiver, preferably from his or her own family, and failing that, neighbours, friends or other substitutes.” This approach was successfully implemented in Sudanese refugee camps in Ethiopia where 'villages' were created with three to five children living together in each traditional hut under the supervision of a caregiver from among their own people.

The establishment of reunification programmes has also played a crucial part in ensuring that unaccompanied children displaced from conflicts are protected and given hope to reunite with their families. The UN High Commissioner for Refugees (UNHCR), through its program called Operation ReUnite, have digitalized photographs of children and made these available to parents searching for their offspring. In Rwanda the Red Cross, UNICEF, UNHCR, the non-governmental organization Save the Children and other partners have collaborated with the Kodak company to enter the photographs and personal data of displaced children into computers. Printouts are then distributed in refugee camps in an effort to reunite families. Overall, more than 100,000 unaccompanied children have been registered in the Great Lakes region of Africa, and by May 1996, over 33,000 had been reunited with their families.

Child soldiers need a chance to be reintegrated into society. They need to find their families, return to school and have a normal life, which could take quite a long time. Though the evils of war have shattered their innocence and opened their eyes to the horrors of life, government and non-government organizations can help bring them back into the mainstream of society and provide them the hope to pick up the pieces and rebuild their dreams again.