Will you forget her?

One second was all it took to ruin her life, her future and her appearance. Her face was ruined. No one was punished.
And that is what the scarred woman says.
To the world at large, she may be a spectacle.
To the woman in pursuit of empty vanity, she may be abhorrent.
To the movie-buffs of the world, she may be the latest cause that Hollywood and the Oscars promotes.
To the feminist, she may be the scion of every instance of wrongdoing that is meted out to women in societies where she is nothing more than a tool in a man’s hands.
To us, a woman like her is a mark of bravery, a survivor of the worst of crimes that could ever be meted out against a woman. When Saving Face, a documentary won the Academy Award for being the best Short Documentary film, the world learned of her story. A woman was attacked with acid, and a British Plastic Surgeon, Dr. Muhammad Jawad, goes to Pakistan to help reconstruct her face.
The film doesn’t just tell the tale of a doctor’s trials and tribulations in wrestling with a difficult health condition, a difficult result of a difficult event, but, the tale of the women who silently suffer and bear the brunt of attacks such as this. 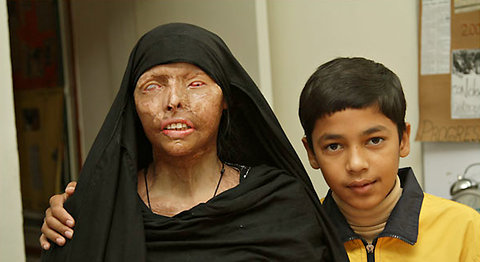 But here’s the biggest thought. The Oscar’s been won. The movie has been applauded. The doctor and his “artistry” have been showered plaudits. Rhetoric hasn’t been spared to show support for the “courage” and “bravery” and the “cause” of the difficult lives of these women. But how long will she be remembered? How long will girls like her be the subject of all attention, before she will be forgotten, lost in the annals of memory and made a small footnote in the history of movie awards?
Posted by Unknown at 07:52

Email ThisBlogThis!Share to TwitterShare to FacebookShare to Pinterest
Labels: Kirthi Gita Jayakumar, Pakistan, violence against women and girls, Women and girls in society