Breastfeeding in the Uniform


Just a few weeks ago I wrote a post about women in the military and today another related article caught my attention.
The debate over public breastfeeding got a new wrinkle when two servicewomen with the United States Air Force released a series of professional photos taken of the young mothers breastfeeding in uniform. Terran Echegoyen-McCabe and Christina Luna are pictured nursing their babies on an Air Force base in an image that they said was intended to raise awareness of the right to breastfeed in public. The striking image has seen a flurry of comments, from supporters who say breastfeeding is a 'fundamental right' to another who compared it to 'defecating in uniform'. 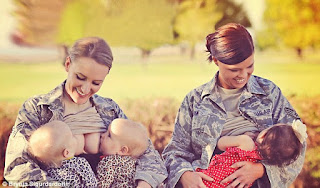 The photos were taken for the Mom2Mom Breastfeeding Support Group, set up by a military wife and mother-of-three to raise awareness of all women's rights to breastfeed in public. Mrs Echegoyen-McCabe is pictured breastfeeding her 10-month-old twin girls on her lunch break during a drill weekend as a member of the Air National Guard. By her side is friend Mrs Luna who feeds her toddler.
“A lot of people are saying it’s a disgrace to the uniform,” said military Spouse and Mom2Mom founder Crystal Scott. “They’re comparing it to urinating and defecating.”
No one can agree on everything and everyone is 100 per cent entitled to their opinion. But to compare breastfeeding to other bodily functions like defecating and urinating? It's disheartening and saddening.'
As the members of the Air National Guard, these women do their best to fulfill their commitment to their country without sacrificing their commitment to their children. There is nothing wrong about these strong beautiful women fighting not just for the freedoms of this country but for themselves and their children. Breastfeeding is a fundamental right in or out of an uniform. Like one of the supporters said: they are still moms, no matter what. “I have breast fed in our lobby, in my car, in the park… I pump, usually in the locker room,” says Echegoyen-McCabe. “I’m proud to be wearing a uniform while breastfeeding. I’m proud of the photo and I hope it encourages other women to know they can breast feed whether they’re active duty, guard or civilian“.
Robyn Roche-Paull, a lactation consultant and a U.S. Navy Veteran wrote a book and has a blog called Breastfeeding in Combat Boots (http://breastfeedingincombatboots.com/military-policies/) which aims to make women's position clearer while breastfeeding and serving their country.  As she writes: „There are NO polices or regulations in any of the military branches that either approve OR disapprove of breastfeeding in uniform”.  She said that arguments against were based on the fact that it shows a woman to be nurturing and therefore 'unprofessional'.
U.S. law states that a woman may breastfeed her child at any location in a Federal building or on Federal property.

Sources: http://www.dailymail.co.uk/news/article-2153821/Military-slams-breastfeeding-moms-posed-uniform-nursing-babies-controversial-photoshoot.html
http://www.opposingviews.com/i/health/parenting/new-moms/breast-feeding/whats-wrong-military-moms-breast-feeding-uniform?page=2
by Natalia Alekseyeva
Posted by Unknown at 08:00

Email ThisBlogThis!Share to TwitterShare to FacebookShare to Pinterest
Labels: Breastfeeding, natalia alekseyeva, women in the army, women in the military forces, women in war