Source
A professional poker player has pleaded guilty to murdering his American wife. 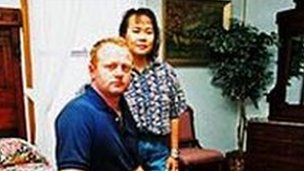 Marcus Bebb-Jones, of Kidderminster, Worcestershire, had previously denied killing Sabrina Bebb-Jones in 1997 and dumping her body in a US national park.
Mrs Bebb-Jones's skull was found in 2004 near Douglas Pass in north-west Colorado. Her husband was arrested at his Worcestershire home in 2009.
The 49-year-old lost his appeal against extradition in 2011. His trial had been postponed from November.
Bebb-Jones entered his plea on Friday and is due to be sentenced on 1 May.
Plea bargain Speaking to the BBC on Tuesday, the district attorney in Garfield County, Sheri Caloia said: "We are happy we can get on with sentencing now.
"Since the skull was discovered it's taken three and a half years to bring [the case] to fruition."
She explained that Bebb-Jones had pleaded guilty to second degree murder using a plea bargain.
Ms Caloia said: "The plea affects the sentencing in that it reduces the number of years the judge can give Mr Bebb-Jones.
"Pleading to first degree murder would be a life sentence but this charge of second degree murder with provocation carries a maximum of 32 years.
"We've stipulated the judge would be limited to a maximum of 20 years."
'Playboy weekend' It is understood Bebb-Jones has blamed the murder on "heat of passion".
Ms Caloia said: "He's not explained what he means by that, I anticipate he would do so at sentencing in order to explain why he believes a lower sentence should be imposed."
In recent years Bebb-Jones had been known for a stint on the online and casino poker circuit, winning thousands of pounds in prize money.
Following his wife's disappearance, he went on a Las Vegas "playboy weekend", partially funded by his wife's credit cards.
He then shot himself in the head in a failed suicide attempt.
Bebb-Jones had been living in Colorado with his wife and their son, Daniel, who was three when his mother vanished.
The couple owned the Hotel Melrose in Grand Junction and Bebb-Jones moved back to the UK with his son in 1998, after selling the hotel.