I HAVE NO CHOICE


Adaobi is a 19 year old girl in suburban Lagos in Nigeria. Sitting in the recovery room of the maternity ward, she stares into space, eyes filled with tears of regret. She has many things on her mind, topmost of all the child she just gave away. She lacks the means to care for her sufficiently and had entered a contract she was told. The couple she gave her child to is a nice, happy, urbane couple who have been unable to conceive for seven years. 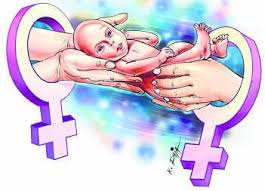 “I have no choice” she says. You see, Adaobi is poor and leaves with her uncle who abuses her regularly.  She has lived with him since both her parents died in a car accident ten years ago. She was in her last year of secondary school when her uncle informs her that he would not be paying her university fees, and she desperately wants to go to university. She is desperate. Subsequently she learns through a friend, of young, rich couples who have been unable to conceive for several years are looking for girls to act as surrogate mothers. She discovers one such couple and subsequently enters into an agreement.  Ada subsequently becomes pregnant by artificial insemination and is registered for antenatal at a specialized clinic. All her needs are taken care of for the period she is pregnant. As the delivery date approaches, she becomes sadder and sadder because she has developed a strong bond with “Charles” (she’s named the baby Charles in her head). When she goes into labour, she checks into the clinic, where she gives birth to a baby boy and immediately the child is taken to the young, couple waiting outside.

She has given away her child and now she is free to go to university because she can now afford it. Moreover she couldn’t possibly keep the child, because she can barely take care of herself, not to talk of another human being. “It’s for the best she says”, or is it?

This is the picture increasingly seen in many African countries. Young girls are acting as surrogate mothers and giving up their newborns to young, rich couples, when they previously simply wanted to abort their pregnancies.
Undoubtedly, surrogate motherhood is a very controversial issue. In many cases, the surrogate bears the child for the contracting couple, willingly gives up to them the child she has borne, and accepts her role with no difficulty. In those cases, the contracting couple views the surrogate with extreme gratitude for helping their dream of having a child come true. The surrogate also feels a great deal of satisfaction, since she has in effect given a “gift of life” to a previously infertile couple. But in some cases that have been well publicized in the media, the surrogate wants to keep the child she has borne and fights the contracting couple for custody. What began as a harmonious relationship between the couple and the surrogate ends with regrets about using this type of reproductive arrangement.

Surrogacy itself is not new. The Old Testament records two incidents of surrogacy (Gen. 16:1-6; 30:1-13), and it appears that use of a surrogate to circumvent female infertility was an accepted practice in the Ancient Near East. What makes today’s surrogacy new is the presence of lawyers and detailed contracts in the previously very private area of procreation. Today, surrogacy does not normally involve any sophisticated medical technology. Normally conception is accomplished by artificial insemination, though in some cases in vitro fertilization is used to impregnate the surrogate. In the latter cases the contracting couple normally provide both sperm and eggs, so that the surrogate mother is not the genetic mother.

Surrogate motherhood can be viewed as a classic social problem, which this century must come to terms with. But till then, we will continue to see many more cases of adaobi and Baby Charles.