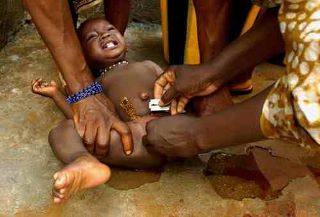 As a medical student, I have managed or witnessed so many medical conditions: those that affects both sexes equally ( the trivial ones like headache) and those more specific for females ( dysmenorrhea, dystocia and other obstetric complications). Never for once did I really think that I will be faced with a practical case of female genital mutilation (FGM). I mean I have read about it in the books, i have received tons of lectures on it, i hate its practice and i preach against it(discussions and seminars) yet i had never really witnessed  any.
There has been so much emphasis and movements against it but yet it is still prevailing in our generation - the 21st century. Opposition to FGM focuses on human rights violations, lack of informed consent, and health risks, which include fatal haemorrhaging, epidermoid cysts, recurrent urinary and vaginal infections, chronic pain, and obstetrical complications.
It quite sad that even the enlightened In the society still engage in such useless, painful, inhumane, barbaric, ........I lack more terms to really express my disgust for this practice.
What's really is their reason for such act: " to reduce the girls libido". Are you serious that's their reason?
Now weighing the pros and cons of such practice, one will agree with me that such a reason isn't a reason after all.

What is female genital mutilation?

The WHO defined it as "all procedures that involve partial or total removal of the external female genitalia, or other injury to the female genital organs for non-medical reasons."
As crude as it sounds, many cultures in Nigeria still engages in such inhumane practice, my experience I believe is just one of the million cases.

Walking into the labour ward one early Monday morning laid a primigravida ( a woman pregnant for the first time) who was about to go into labour. The senior registrar and  house officers racked their heads making sure she had all she will need for the process. This was about 9:00am. She went into labour at about 9:30am..... This was indeed a long and difficult one. Thank God, the baby finally came.......however, the woman suffered a third degree perineal laceration. She was in so much pain that the birth of the baby failed to mask it.
Immediately, we then rushed her in the theatre in other to repair the laceration. This was about 10:30am.
The repair was completed at about 12 noon. Then came the part of urethral catheterization as the woman suffered acute urinary retention. The was however another hurdle as it was difficult to find her urethra opening: the anatomy of her external genitalia was distorted. It wasn't easy to say for sure which opening led to the bladder......the woman was in severe pain now as the local anesthesia was beginning to wear off accompanied by the acute urinary retention she was experiencing....
We still couldn't find the opening, blood was everywhere. This about 1:30 pm......


This was a clear case of FGM type III. Due to the adhesion formed by the procedure, the normal elastic nature of both labii were lost. This prevented the normal physiologic dilatation that occurs during labour thus.......lead to tearing ( perineal laceration). This distorted anatomy of her external genitalia made the urethral catheterization difficult. The acute urinary retention she experienced was due to the extreme pain she suffered from the laceration.
Indeed I felt her pain. I couldn't sympathize with her as it wouldn't  be professional.... I imagined the pain she went through as a young adult when this barbaric procedure was carried out on her. The struggle she offered to those who pinned her down to the floor, the trauma suffered thereafter........now, such pain all again ( in addition to the normal labour pain)......
Will she recover from this nightmare? Will she ever opt for SVD( spontaneous vaginal delivery) again? ......so many questions I asked myself.....all this just because her primitive culture felt they were doing her a favour by "reducing her libido"...... This is nonsense

Other complications of this "primitive" act - FGM includes:

FGM has immediate and late complications. Immediate complications are increased when FGM is performed in traditional ways, and without access to medical resources: the procedure is extremely painful and a bleeding complication can be fatal. Other immediate complications include acute urinary retention, urinary infection, wound infection, septicemia, tetanus, and in case of un sterile and reused instruments, hepatitis and HIV. According to UNICEF,it is unknown how many girls and women die from the procedure because "few records are kept" and fatalities caused by FGM "are rarely reported as such"
Late complications may vary depending on the type of FGM performed. The formation of scars and keloids can lead to strictures, obstruction or fistula formation of the urinary and genital tracts. Urinary tract sequelae include damage to urethra and bladder with infections and incontinence. Genital tract sequelae include vaginal and pelvic infections, dysmenorrhea, dyspareunia, and infertility. Complete obstruction of the vagina results in hematocolpos.

I believe we should all be actively involved to fight FGM....first let's start with ourselves, changing our mindset.


By
Osita-Okoye, Chinaza
Posted by Unknown at 08:00

Email ThisBlogThis!Share to TwitterShare to FacebookShare to Pinterest
Labels: FGM, Osita-Okoye, Women and girls in society