Is the Right to Food just Rhetoric?

For years together now, and even as I pen this piece, the world is peppered with people whose lives are spent staring hunger in its face, as their lifestyles are seduced by poverty and illness. Ample rhetoric has been around, as leader after leader pledges himself to eradicate world poverty, world hunger, and uplift masses in need of monetary and social rehabilitation. All that remains, however, is either a leader whose efforts have been so miniscule that they were virtually intangible, or a leader whose didactic verbosity earned him enough money to siphon into his own private fund. The result, then, is the number game. Death by hunger to the gubernatorial realm becomes a statistic, while to the deprived families bury another cadaverous remnant, wondering who and when the next would be. 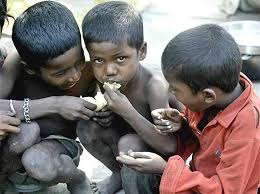 There is no doubt that we need to have a law installed firmly to assert and secure human rights, in the face of so many instances of violations one comes across. However, one cannot help but note that merely because the law is in place, these violations and deprivations have not quite come to an end. Infusing a little wave of pragmatism here, it is without doubt that real people need access to real food to quell their hunger. No amount of lofty legalese, couched in paper tigers, would benefit anyone suffering the ruthless brunt of hunger. One’s access to food determines the entire fabric of his life, and any event depriving him of his food would virtually function to the detriment of his life itself. Accessing food in human dignity is a rather important part of human rights. The right to “food”, the right to “life”, the right to “livelihood” and even the famous “right to feed oneself” have all come across as exemplary battle-cries of Human Rights activists. But the percolation of these rights into action has been deplorable, to say the least.

What use is a right inscribed on paper, when there is simply no food given to the ones in need? When famines occur, when there is artificial scarcity, what logical mind would believe that a person affected by hunger could stand in a court of law and argue for a morsel? Food in and of itself is not often the problem, and nor are vagaries of geographical cadre, such as droughts and famines. There is enough food to go around. People are deprived of food not because there isn’t any, but because they are deprived of access to it. As a consequence, the hungry are driven to steal, to break the law to get food, which may even cost them their lives. Bonded labour ties them to backbreaking working hours to fetch a tasteless, nutrition-deprived meal. Prisoners lose access to food because, well, they are prisoners and those in charge of them may decide to refuse them a meal. Peasants and farming populace struggle to protect their land holdings in the wake of unfriendly policies, land grabbing, land ceiling and other landlord friendly law and the looming threat of mouths to feed from a barren land. There is no dearth of aid being pumped into a famine stricken world. But it just doesn’t reach the hungry ones.

Scarcity is not the factor tempering insufficiency of access to food. It is the denial of access to food producing means, resources and work. Food is being produced increasingly in a bid to maximize returns on investments in food production. The rich gain the best of food production, as new frozen foods, organically produced groceries and the like benefit them aplenty. Access to food in dignity does not mean the right to access a morsel or a meal, but the freedom to be employed, in whatever manner, in the industry that produces resources that allow room for self-sufficiency.

Prices are increasing world over, on wheat and grain. The United Nations and World Bank food price indices show nearly record highs. Concerns are rife that food inflation would definitely push scores of people into poverty, or even jolt political stability in some states. School level economics would break down this phenomenon easily to narrate that the rich remain rich, the poor worsen. Hunger cripples them, as they find themselves squarely in the centre of a condition that renders them incapable of working. No money, no education, no work, no money. One big vicious circle.

Should the world begin to see world hunger in its truest form, and begin to unshackle the old and inefficient means of food distribution, and work on a more pragmatic means to architect access to something as basic as food? Sound reasoning sits at the base of the tenet, no doubt, but the principle has been brandished without compunction as a means to garner votes, as a means to assert political superiority. No policy has been personified in action. There is no point screaming oneself hoarse about the cache of rights a human being enjoys, if there is never going to be implementation of the law. What use are a few words on paper, when there is nothing to feed a starving stomach? Without implementation, the law fails in its purpose, mocking the ones it guarantees rights to. “Take the right”, it says, sneering. “That’s all I can give you.”