Girls at risk of mutilation 'lack help from teachers' 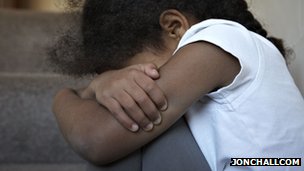 Girls at risk of genital mutilation are not being helped as their teachers lack training in how to deal with this type of child abuse, a charity has warned.
Ritual cutting of young girls, some as young as four, is practised by some African, Middle Eastern and Asian communities, said the NSPCC.
The charity is urging schools to treat female genital mutilation as they would other forms of child abuse.
"Teachers are on the front line", said Lisa Harker, NSPCC head of strategy.
Some 20,000 girls in England and Wales are thought to be at risk of this illegal practice, according to government figures, but there are fears that this figure masks a larger problem.
In March, a study by midwives revealed more than 100 victims in Bristol alone over a single nine-month period.
'Life-threatening' The NSPCC says the practice has no medical benefits but is motivated by cultural beliefs about preparing a girl for adulthood and marriage by making her "clean, chaste and faithful".
The charity describes it as being potentially life-threatening and sometimes carried out without anaesthetic.
"It can leave young victims in agony and with health and psychological problems that continue into adulthood," the NSPCC says.
The government says teachers have a key role in spotting children who may be at risk of or who have undergone genital cutting.
In January, the schools watchdog, Ofsted, announced it would be including schools' safeguarding arrangements on female genital mutilation in inspections.
Updated Ofsted guidance says that key staff should be able to show how alert they are to "possible signs that a child has been subject to female genital mutilation or is at risk of being abused through it".
However, some 83% of teachers in England and Wales said they had not had child protection training in this area, according to a survey for the NSPCC.
The YouGov poll of over 1,000 teachers also suggested that some 68% were unaware of government guidance on schools policy on this form of abuse.
"Teachers are on the front line in the fight against female genital mutilation, yet they clearly feel unprepared for this role", said Ms Harker, adding that as the practice is usually hidden, "teachers may be the only professionals these children come into contact with."
The NSPCC wants schools to create a culture where children can come forward and tell their teachers if they or a friend are at risk.
The charity says schools should have protocols in place so that individual teachers do not have to handle cases alone.
Warning signs It lists signs that a girl has already had female genital mutilation as being unable to cross her legs while sitting on the floor, trying to avoid PE, frequent urinary tract infections, being in pain or clutching at her body, going to the toilet more often than usual and staying there for an unusually long time and taking a week off school when she has her period.
St Werburgh's Primary in Bristol was the first UK school to develop a policy against the practice.
Head teacher Claire Smith called for a "real stand on female genital mutilation to ensure that school leaders are trained in this area, that staff on the frontline with pupils understand this practice and that head teachers and governing bodies have robust policies on attendance in place in order to identify children at risk."
In Bristol some 117 women, seen by midwives, had undergone female genital mutilation, according to a NHS study.
The city's NHS Trust had asked the midwives to check all their patients for the procedure over a nine month period.
A government spokesman said a new action plan for tackling violence against women and girls had a renewed focus on protecting potential victims and sent a strong message that female genital mutilation would not be tolerated.
"Schools play an important role in raising pupils' awareness of this issue. We expect them to refer cases of concern to the relevant agencies in the same way as they would for any type of abuse."