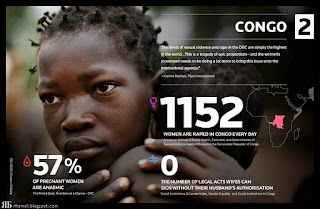 When you think of genocide, the first things that probably come to mind are visuals from the Holocaust, Rwanda and Bosnia, among others. Although the conventional notion is to understand that genocide implies “mass killing”, there is more to it. By definition, genocide includes anything that is done to prevent the ability of a segment of population to procreate – which is what the Eugenics movement was.
By extending that definition, genocide also includes rape and sexual violence.
What makes sexual violence so common on every warfront and women the easiest targets is the fact that for those that carry it out, rape and sexual violence is cheap, easy and extremely effective.  Armed groups, combatants and non-combatants use rape as a means to terrorize and control women and communities. Subjecting women to sexual violence stigmatizes the woman, besides harming her physically and psychologically. Families turn these women out of their homes. Men refuse to marry victims of sexual violence. When women are spurned the backbone of a societal structure is broken.
Sexual violence is calculated, brutal and absolutely bereft of humanity. Using sexual violence as a modus operandi in warfare is intricately woven with the hegemonic desire for power. Sexual violence in conflict is a preferred method to reinforce gendered and political hierarchies. Rape is cheap, easy and extremely effective. It is vital to ensure that such widespread violence is neither perceived as a “by-product” of war, nor deemed a mere practice characteristic of combatants. Sexual violence has been perpetrated by nearly every entity, not just the combatants themselves.
Genocide is carried out with an intent to destroy in whole or in part, a national or an ethnic group, through a) Killing members of the group; b) Causing serious bodily or mental harm to members of the group; c) Deliberately inflicting on the group conditions of life calculated to bring about its physical destruction in whole or in part; d) Imposing measures intended to prevent births within the group; and e) Forcibly transferring children of the group to another group.
In the Akayesu case the Trial Chamber of the ICC ruled that acts of rape can form an integral part of the process of destruction of a group. “These rapes resulted in physical and psychological destruction of Tutsi women, their families and their communities. Sexual violence was an integral part of the process of destruction, specifically targeting Tutsi women and specifically contributing to their destruction and to the destruction of the Tutsi group as a whole.”
As it stands presently, it is only a conclusion consequent to interpretation. If the law against Genocide could be expanded to explicitly include Genocide within its fold, it would create a watertight legislative provision that can ensure that perpetrators of sexual violence would not be let off lightly, but would be tried for Genocide.
Posted by Unknown at 08:00