The most prominent of five recently released Chinese women’s rights activists feels her dedication to the cause has grown stronger after spending 37 days in detention with interrogators who blew smoke onto her face and insulted her sexual orientation, her girlfriend and her lawyer said.
Li Tingting, 25, an openly lesbian campaigner for women’s issues, has been at the centre of an international outcry over China’s detention of activists. Her girlfriend, who spoke to The Associated Press on condition she be identified only by her English name of Teresa, relayed comments from Li for the first time since the activist’s conditional release from a Beijing jail last Monday. Teresa spoke in the presence of Li’s lawyer Wang Yu, who also confirmed Li’s comments.
“‘Feminism is my soul,”‘ Teresa quoted Li as saying. “‘I thought a lot and came to believe what I do cannot be wrong. My belief is firmer. Feminism will surely be inseparable from me.”‘
Li and four other women, ranging in age from 25 to 32, were detained in a criminal investigation for their plans to hand out stickers and flyers denouncing sexual harassment, in a case reflecting the Chinese leadership’s deep distrust of any efforts to organise civil action in a group outside the ruling Communist Party’s control.
Known for colourful, high-profile protests — from “potty parity” sit-ins to street theatre denouncing spousal abuse — the five women drew what has been, for recent years, an unusual amount of attention overseas. Foreign governments, rights groups and luminaries including US presidential candidate Hillary Clinton criticized the arrests as an overreaction by a repressive Chinese government, and urged Chinese authorities to drop the investigations against the women.
China’s Foreign Ministry has responded by saying the detentions are an internal affair being handled according to law, and urging foreign countries not to interfere. Portraits of the five Chinese female activists are pictured during a protest calling for their release in Hong Kong earlier this month. Photo: ReutersThe five were released, but remain under investigation and have been told not to travel outside their home cities or meet journalists.
AP reporters traveled to Li’s home village of Hongtongying, a community of wheat fields and willow trees on Beijing’s outskirts, but were trailed by unidentified vehicles. In a nearby town centre, the journalists were able to see Li with Teresa as they walked arm-in-arm from a tea house to a hospital, but could not interview Li. Her friend and the lawyer said Li would abide by state security officials’ demands that she grant no interviews. They also released a written statement by Li, in which she pleaded innocence.
“What I have done does not provoke trouble, but is mild advocacy that does not amount to any crime,” Li wrote. “I demand police dismiss the case immediately, remove coercive restrictions on me and return innocence to me.”
The lawyer said the demand that Li hold no interviews has no basis under Chinese law.
“The activism by Li Tingting not only complies with Chinese law, but should be lauded because she is promoting the law,” Wang said, referring to China’s law, policy and declarations championing equal rights for women.
“She should not have been treated so illegally by authorities. For a young woman who is able to do what she’s done, I think she should be considered a hope for China,” Wang said.
Li will need some time to readjust but has been in good spirits despite her ordeal, her friend and the lawyer said. In the statement, Li said she was deprived of sleep and had cigarette smoke blown onto her face while she was restrained in an iron interrogation chair. 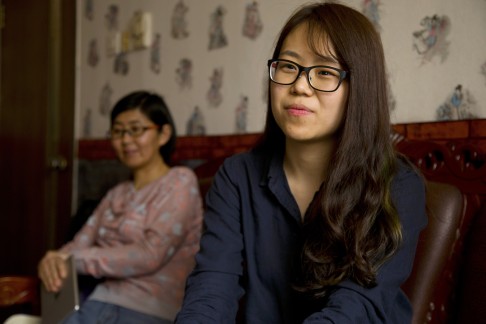 Teresa (right), the girlfriend of Chinese activist Li Tingting, speaks during an interview as she sits with Li's lawyer Wang Yu in Beijing. Photo: AP“It made my nostrils and eyes dry and uncomfortable,” Li wrote. “I could not move at all and felt my dignity was greatly insulted.”
Interrogators shone strong light into her eyes and repeatedly called her homosexuality “sickening” and “shameless,” Li wrote.
Her lawyer Wang said the acts by interrogators amounted to torture.
Teresa, who also was briefly detained by police but said she didn’t want to give her full name out of fear for her personal safety, said Li was “delighted” to learn of the support she received from Clinton and from one of her idols, Eve Ensler.
Author of the “Vagina Monologues,” Ensler called for people around the world to protest in front of Chinese embassies and consulates in support of Li and the four other Chinese women’s rights activists.
She and other rights advocates have attributed the early release of the five to the international pressure on the issue, which threatened to embarrass China ahead of a key anniversary in September of a high-profile women’s rights conference in 1995.
Born just weeks after Chinese troops crushed student pro-democracy protests in the heart of Beijing, Li grew up in a working-class household. She came out early as a lesbian to her parents, who reacted badly to the news. She found her tribe in college where she joined other activists working on HIV, gender equality and gay and lesbian issues. With her at the helm, the activists began staging tongue-in-cheek, media-friendly public protests, which she called performance art.
Li and other women once strolled down a busy Beijing shopping street wearing blood-stained wedding dresses and warning passing couples about domestic abuse. In another action, several activists boarded a Shanghai subway train in miniskirts and metal breastplates after female passengers reported they had been groped. She also helped organise sit-ins at public restrooms to demand more toilets for women.
Chinese authorities once tried to silence Li by offering her a job on a governmental women’s federation if she would stop her protests and social media work. Li turned down the offer and later suspended her work in the face of growing police monitoring. Her lawyer Wang said Li had always been cautious about her activism, seeking legal advice before she took action.
Li was detained just ahead of International Women’s Day, which Chinese authorities mark by touting gender equality under the leadership of the Communist Party.
Teresa said that Li thought her group’s activism on behalf of women’s rights would carry little political risk, and was surprised the state came down on them with such force. Li believes it shows that China’s civil society is facing extreme difficulty, and that much “more needs to be done,” Teresa said
Source: http://www.scmp.com/news/china/society/article/1770616/chinese-womens-rights-activist-more-determined-after-lockup
Posted by Unknown at 00:00