Early marriage affects women's health status adversely. A vast number of girls are married at the teenage. It leads to teenage pregnancy and various physiological problems. In rural India almost 60 per cent of girls are married before they are 18. Nearly 60 per cent of married girls bear children before they are 19. Almost one third of all babies are born with low birth weight. Thus, young girls are introduced to the sexual life and to the reproduction processes at the teenage.Because of malnutrition, over burden of work illiteracy, ignorance of the sex-behavior these pregnant girls take high risk of life. Around 10 to 15% of the annual births are from these adolescent mothers. However, most of their babies suffer from malnutrition, under weight and risk of mortality. In India, women have on an average 8-9 pregnancy and they spend around 80% of their reproductive years in pregnancy and lactation. Study shows that in the low income group pregnant women have deficiency of 1,100 calories and lactating women 1,000 calories. 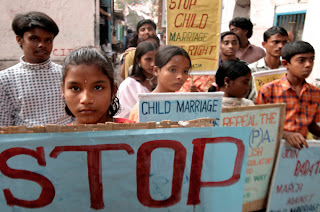 Women of the lower socio-economic groups gain only around 3-5 kgs during pregnancy, which is far less than the required weight. Anemia in pregnancy accounts directly 15 to 20% of all material deaths in India. The maternal-mortality according to official report, is 400 to 500 per 1, 00,000 births. However, this figure is as high as 1,000 to 1,200 to 1,200 in some rural areas. Again, more than 71% and 29% of the deliveries in the rural and urban areas took place without trained personnel (NPPW, 1988). In most of the rural areas, Medical Termination of pregnancy services is not available. Besides, women are not aware about the Medical Termination of Pregnancy Act, 1971 that has made abortion legal. Hence, illegal abortions by incompetent persons continue, resulting in abortion-related mortality and morbidity as serious problems.
Harmful effects of early marriage:Early marriage can cause severe problems like the following:

Early marriage of girls and boys impairs the realization and enjoyment of virtually every one of their rights. The imposition of a marriage partner on children or adolescents who are in no way ready for married life, and whose marriage will deprive them of freedom, opportunity for personal development, and other rights including health and well-being, education, and participation in civic life, nullifies the meaning of the CRC’s core protections for those concerned. Unless measures are taken to address early marriage, it will continue to be a major stumbling block to the achievement of human rights. This Digest is intended merely as a starting-point, drawing attention to a practice that has been neglected by both women’s and children’s rights campaigners in recent decades. It is hoped that it will provide an incentive for a campaign to prevent early marriage and end the silent misery of millions of girls in  many countries around the world, to open up new horizons for them, and contribute to the development of policies, programmes and advocacy to bring this about.

By Sreejesh K
Posted by Unknown at 07:49