The trial is beginning in Spain of a man accused of murdering and beheading a British grandmother in a supermarket on the holiday island of Tenerife.

Jennifer Mills-Westley, 60, was killed in the resort of Los Cristianos in the Canary Islands on 13 May 2011. 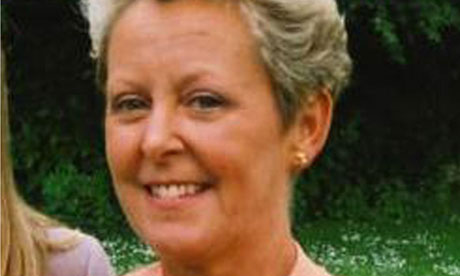 Bulgarian man Deyan Deyanov, 29, is charged with her murder and will stand trial before a jury at the provincial court in Santa Cruz de Tenerife starting on Monday. Prosecutors are expected to ask for a sentence of 20 years in a mental asylum because he has chronic paranoid schizophrenia.
Mills-Westley, originally from Norwich, Norfolk, was inside a shop on Avenida Juan Carlos when she was stabbed and decapitated.
Deyanov reportedly walked into a shop to ask for a large knife before launching the attack. After killing her he was allegedly heard saying "God is on earth" as he carried his victim's head out the front door.
Mills-Westley had been living in Tenerife after retiring from her job as a road safety officer with Norfolk county council.
Deyanov reportedly had a history of mental illness that had seen him sectioned in the UK, where he had lived, and in the Canary Islands.
In the summer of 2010 he had been sectioned under the Mental Health Act at Glan Clwyd Hospital in north Wales.
He had been released from a local hospital in February 2011 following psychiatric treatment, according to regional newspaper La Opinion.
A Spanish judge had issued a search and arrest order for him before the killing for his alleged involvement in a fight where he appeared to be on drugs.

His defence is expected to argue that he was not criminally responsible for Ms Mills-Westley's death because of his mental condition.
Her daughters, Sarah and Sam, have said they will attend the trial to come "face to face" with her killer and hope to banish memories which have been "shrouded by the brutality of her death".
In a joint statement they said: "On Friday May 13 2011 our lives changed irrevocably when we heard the shocking news that our much loved mother had been brutally murdered in Tenerife.
"Now, nearly two years later, we will come face to face with the man who took her life that day and relive the heart-breaking details of the events leading up to her untimely death.
"Going back to Tenerife not only is a daunting prospect but it will reopen our wounds.
"We have to hope that justice will prevail so we can lay our mother to rest, and remember her in happier times rather than the memories we currently have – memories which are shrouded by the brutality of her death."
Posted by Unknown at 18:55