Indira Gandhi, Margaret Tatcher, Condoleezza Rice and Golda Meir. Does any of these names ring a bell in your head? What is something that they have in common? They are all the prominent figures in politics, and they happen to be women. Women are starting to break free from the shells that keep them away from speaking out their minds and taking part in making decisions. Women start taking center stage in politics, and it happens in many parts of the world. Have you ever wondered which country rank first in the world for the percentage of women in parliaments?

Country with the highest percentage of women parliamentarians is…

NOT the United States, NOT the United Kingdom, and NOT any of those countries in the developed world. Believe it or not, it is RWANDA. Even more surprising, Rwanda is just one of the sub-Saharan African countries that have seen a high percentage of inclusion of women parliamentarians. Some other countries include South Africa, Uganda, Mozambique, and so on. Primarily, they achieved the increase in women's participation through the use of quotas to ensure the presence of women in their institutions.

The quota system (reserved seats) for women was first established in Uganda in 1986 by president, Yoweri Museveni. He acknowledged women’s contributions to the victory of his National Resistance Movement in the Ugandan civil war. However, Tanzania was the first African country to include quota (20%) in its national constitution.

Of the many countries we can talk about, today’s post will focus on Rwanda first. You might be wondering already about how this country thrives in promoting women in their legislative. It started with the country’s social revolution in 1950s, leading up to independence in 1962. The revolution involved many persecution and violence by Hutu people against the then-ruling Tutsi people. The Hutu republic finally managed to rule out the Tutsis elite supported by Belgian colonials, forcing many Tutsis to seek exiles in neighbouring countries, including Uganda.

While in exiles, a group of Rwandan in Uganda formed Rwandan Patriotic Front (RPF) in 1987. The party members were much exposed to gender equality issues and Uganda’s use of quota system to involve women in government. Their experience later inspires them to do the same in Rwanda after the Genocide in 1994, where RPF assumed victory over the Hutu government. 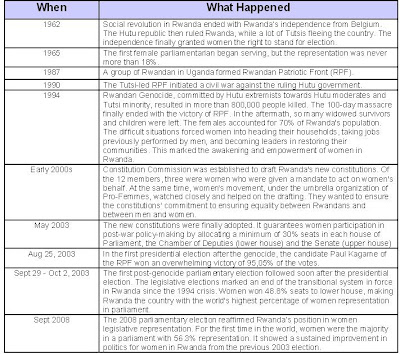 The advancement of women in contemporary Rwanda seems like a good sign of gender equality in politics. Women can now voice their ideas and contribute to policy-making in their country. How have they impacted the political life in Rwanda? What are their challenges? Let’s explore that in the next post. 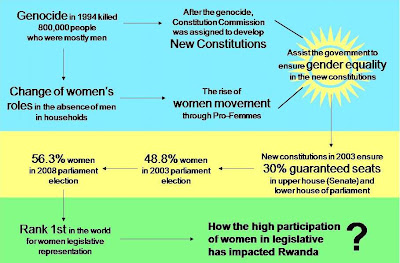 Rank 1st in Percentage of Women Parliamentarians: How Rwanda Reached Its Current Position

Elizabeth Powley (2005): Women Hold Up Half of the Parliaments