Sarah and Ghaidaa: Two Yemeni girls in Poland, sharing their thoughts on the revolution

“I really want to return to Yemen, because, let’s face it, no matter how bad your country is, it is still your country. It’s like your family. They can suck big time but you still love them”, that is what Sarah, a 25-year-old student from Yemen, declared, in a dormitory somewhere in Warsaw.
She and her friend Ghaidaa are two Yemeni girls studying in Poland. They have both earned a scholarship by the Erasmus program, for their bachelor and postgraduate studies. Sarah is a beautiful English student wearing a hijab full of flowers, and Ghaidaa is a charming women’s rights activist who absolutely adores her husband…
When one runs into two Muslim girls in Europe, away from their land that has been tormented by a 33 year old unjust regime and a conservative society, one has lots of questions to ask. Both girls have participated in the demonstrations against Ali Abdullah Saleh. They have tons of experience, and plenty of things to share about the revolution that has been going on for a year now, in Change Square. 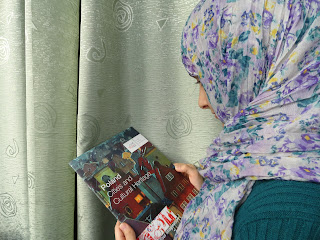 Email ThisBlogThis!Share to TwitterShare to FacebookShare to Pinterest
Labels: Maria Sidiropoulou, Sarah and Ghaidaa, Women and girls in society, women in revolution, Yemen