Lebanese laws and courts governing marriage and child custody "discriminate against women" from all religious groups, often trapping them in abusive unions, a Human Rights Watch report published Monday said.
The small Arab country has a fragile mosaic of Christian and Muslim communities of multiple denominations whose right to oversee their own religious courts is enshrined in the constitution.
"Lebanon has 15 separate personal status laws for its recognised religions but no civil code covering issues such as divorce, property rights or care of children," the New York-based group said. 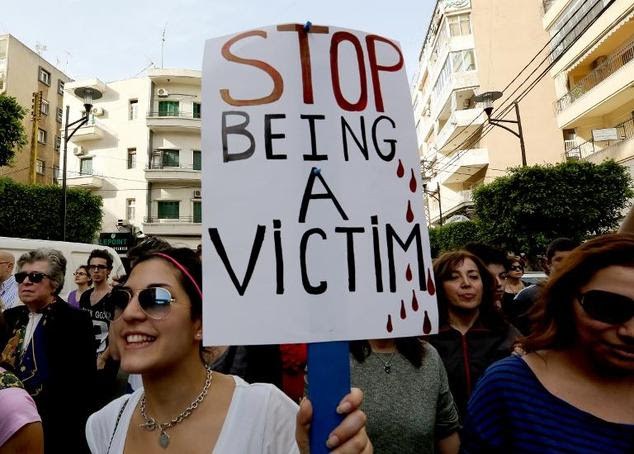 +1
Women take part in a rally, notably to denounce domestic violence, on March 8, 2014, in Beirut, Lebanon ©Anwar Amro (AFP/File)
"These laws are administered by autonomous religious courts with little or no government oversight, and often issue rulings that violate women's human rights."
The 114-page report, titled "Unequal and Unprotected: Women's Rights Under Lebanon's Religious Personal Status Laws," interviews women from across Lebanon's sectarian spectrum and analyses hundreds of legal judgements.
It says Sunni and Shiite Muslim women have limited access to divorce, while "men... have a unilateral, unlimited right to pronounce a divorce, with or without cause".
Neither Christian men nor women are allowed to divorce, but "there are instances that allow men more grounds" for divorce or annulment.
Druze women also have limited access to divorce, "while Druze men can obtain a divorce, with or without cause", said the report.
All Lebanese women suffer from a lack of protection from domestic violence, as well as financial vulnerability if they do divorce an abusive husband, the group said.
In 2014, Lebanon's parliament passed a landmark law on domestic violence.
While it marked a significant step forward for women, it defined domestic violence "narrowly, thus failing to provide adequate protection", said HRW.
In the event of conflict between the new domestic violence law and pre-existing personal status laws, the latter take precedence, the report added.
And women who decide to divorce still face serious financial consequences, as "Lebanese law does not recognise the legal concept of marital property".
After a marriage ends, "property reverts to the spouse in whose name it is registered (typically the husband), regardless of who has made contributions to it".
The issue of child custody is just as problematic, according to the report, violating the standards set by the Convention on the Rights of the Child.
"Human Rights Watch interviewed women who stayed in abusive marriages, gave up their monetary rights, and did not remarry to maintain primary care of their children in cases where judges did not consider the best interests of the child," the report said.
One Christian woman, Mireille, was quoted by HRW as saying: "I forced myself to bear beyond what a human being can take, all the injustices and violence. My daughters, who are my soul and my life, were the main reason... I couldn't even bear the idea of losing them."
The watchdog called for fundamental changes to ensure equal rights for all Lebanese, regardless of gender or religion.

Source: http://www.dailymail.co.uk/wires/afp/article-2917078/Lebanon-religious-laws-violate-womens-rights-HRW.html
Posted by Unknown at 00:00