The protester’s life: frustration, despair, and human rights violations
2011 Time’s person of the year is the protester. From its birth in Tunisia, revolution has set the pace for change in the Arab world, in the United States (where the occupy movement gains strength), in Russia (where locals complain about fraudulent elections), and now it is back in Egypt.
Since November 18th, Egyptians are back to the streets chanting for more than hope. They crave for structural change. Their frustration and despair has originated a moving association where people get to speak up and condemn the abuse of those in dominance. The citizens accused the SCAF of suffering from power poisoning. Despite its continuous denial, the junta is finally showing its truth face, in the form of human rights violations.
The following image has gone viral on internet for the past hours: 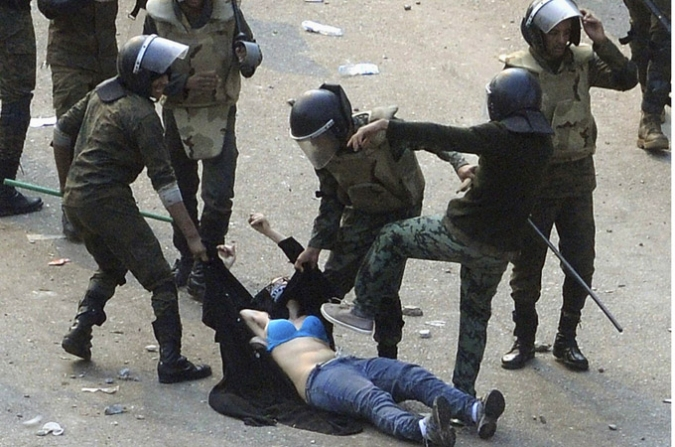 On this picture, a woman (protester) is been stripped and beaten up by the military forces. Probably, your reaction to it is similar to mine; you may find yourself torn, sad, ashamed, disgusted, and helpless. Not to judge, humanity is showing a terrifying facade. According to the tweets and comments I get from friends living in Cairo, this is the first time that the army is reacting this violently. (Let’s keep in mind that the SCAF was the people’s ally on the end of the Mubarak’s era.)
2011 is a year filled up on adversity and crossroads; yet, it allows revolution and with it, possibility, and inspiration. Early this month I wrote that I was unclear about Egypt’s road after the elections, although I found it would be fascinating, passionate, and hopeful. I could have not foreseen it would also be this sad and horrifying. Yesterday, Aljazera posted a video showing soldiers shooting directly to protesters in order to “clean up” the streets. Also, we can observe them tearing apart tents and setting them on fire. Already, when the turmoil started a month ago, I was considering how unsettling was to observe the abuse of tear gas as a form of “pacifier”. After this weekend proceedings, I fear for Egyptian’s path. Libya and Syria have held the worst images on human rights violations on this revolution. I hope this do not occur in Egypt.

The protester’s life is without any doubt inspiring, and it has been taken as a role model around the globe. Let’s do something, anything, in our capacity to end demonstrations of oppression that take harm mentally or physically the life of another human being. In my case, I spread my words of unrest and sadness.
By Katherine R Vasquez Tarazona
Posted by Unknown at 07:39