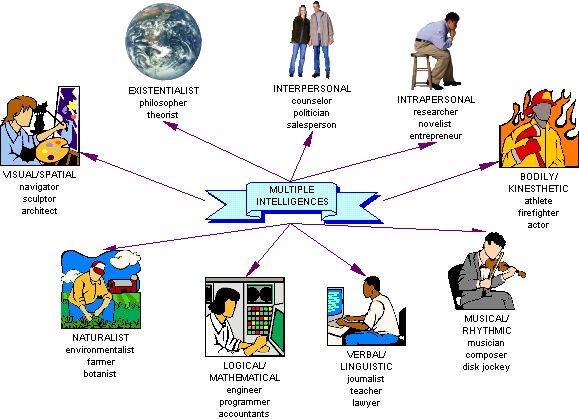 A lot of the times people think of intelligence in one way, the logical and linear form of intelligence that we are trained and taught to emulate in school and measured in IQ tests. But intelligence is a lot more complex than that as demonstrated by autistic geniuses as well as some dyslexic ones. One of the pioneers in multiple intelligences is Dr Howard Gardner, a professor of cognition and education at the Harvard Graduate School of Education. He has identified nine different types of intelligence than can assist in our better understanding of who we are and how we function.

His work is applied in education to ensure that children with the different types of intelligence are not excluded from the learning process and are allowed to grow within their cognitive path. Multiple Intelligence (MI) allows parents and teachers an opportunity to understand and teach their children in multiple ways. This increases the chances of success for a child. These intelligences are not mutually exclusive and an individual can possess any combination of them.

For more information about Dr Gardner and his work, you can visit his site here.If you are interested in finding out where your strengths lie, take a quick MI Assessment here.
Posted by Unknown at 08:00